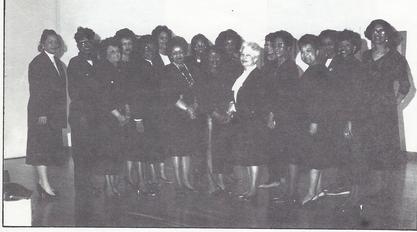 is to impact the quality of life for humankind through community service.  In response to an ever-changing society, The Links, Incorporated will increase its participation nationally and internationally for a stronger partnership with people of good will and good deeds.

​The Links, Incorporated is an international, not-for-profit corporation, established in 1946. The membership consists of more than 16,000 professional women of African descent in 288 chapters located in 41 states, the District of Columbia, the Commonwealth of the Bahamas, and the United Kingdom. It is one of the nation’s oldest and largest volunteer service organizations of extraordinary women who are committed to enriching, sustaining and ensuring the culture and economic survival of African Americans and other persons of African ancestry.

Our core values are friendship, integrity, honesty, service, commitment, family relationships, courage, respect for self and others, legacy, confidentiality, responsibility, and accountability. The members of The Links, Incorporated are influential decision makers and opinion leaders. The Links, Incorporated has attracted many distinguished women who are individual achievers and have made a difference in their communities and the world. They are business and civic leaders, role models, mentors, activists and volunteers who work toward a common vision by engaging like-minded organizations and individuals for partnership. Links members contribute more than 1 million documented hours of community service annually – strengthening their communities and enhancing the nation. The organization is the recipient of awards from the UN Association of New York and the Leon H. Sullivan Foundation for its premier programs.

To foster artistic endeavors.
To promote the well-being of African American families.
To collaborate with organizations with similar goals and objectives.
To increase awareness of international issues, particularly those affecting people of African descent.

Organizing the Chapter: In the fall of 1987 a group of five women* met with Lillian Bell to organize and discuss ways to improve conditions of African Americans in our area. Realizing that the problem was severe in as much as there was no political power to bring our needs to focus, it was suggested that a chapter of The Links, Incorporated in our area might be a way to begin meeting these needs.  The group discussed literature received from the National Office of The Links, Incorporated, regarding history, purpose, and philosophy of the organization. At the conclusion of the meeting, a letter expressing interest in establishing a Chapter of The Links, Incorporated was submitted to the National Chapter Establishment Officer.

The Chapter as an Interest Group: Upon receiving information from the National Establishment Officer, plans were implemented and other members were invited. The name “Elkhart-South Bend Women’s Association Interest Group,” was selected. Club officers were appointed, committees were formed, and bylaws were adopted. Commitment, enthusiasm, drive, stamina, initiative, ideas, and dedication were our main thrust.

On July 7, 1989, the Interest Group was informed that approval was given by the National Organization to start the chapter membership process.

The needs of the community were identified to formulate programs meeting needs in the areas of education, cultural, and civic responsibilities.

The Interest Group set forth in a cooperative endeavor to establish unity and impact upon the communities of South Bend, Mishawaka, Elkhart, Goshen and Osceola.

Efforts came to fruition on April 21, 1990, when the South Bend Area Chapter, The Links, Incorporated was chartered.